My children are my world! They mean everything to me

and I wouldn’t know where I would be if I didn’t have them in my life. They are, truly, my blessings from God. Now, it took me a long time to realize why God made me a mother. When I found out I was pregnant with my oldest son, Elijah, I was scared and didn’t know what to expect. I felt the same way when I found out I was pregnant with my daughter, Emiyah, when Elijah was just five months old. When I was pregnant with my youngest son, Edwin Jr., I was, literally, in denial for months because of these same exact feelings. My children’s father found out he had Congestive Heart Failure two weeks before I had Elijah. We made the decision, from there, that I would work, and he would stay home and take care of Elijah, then Emiyah, and then Edwin Jr. After all of my pregnancies, because I was the only one working, and I was on a temporary job status with the county, they held my job, until I was able to come back. I went back to work after being out four weeks with all of my children. This was a decision I made on my own, even though at times my children’s father would beg me to wait longer, but I knew what had to be done. During this time, I only had a short time to bond, fully, with my children. I worked long hours and after getting home so late, I was so tired. Over the years, I’ve tried to build a better bond with my children, even while working to provide. Especially, now, with their father not here, I feel I have had to love them deeper and more wisely.

Last week, Emiyah’s allergies started to make her sick. She kept a fever, continuously sneezed, and had very puffy, watery eyes. With her not feeling well, I tried to console her as best I knew how, but she would look me in my eyes and tell me, “I want my daddy.” Every time she said these words, it hurt a little more and more each time. I know that it wasn’t her fault, but it made me reevaluate my relationships with my children, especially her, being that I always wanted to have a special relationship with her like I had, and still have, with my mother. Her wanting her father made me think about how many times I took off work to take care of them or how many nights I stayed up to watch over them while they were sick. To tell you the truth, I could not think of many. Their father was there through it all, and not only because he had to be, but he really wanted to be.

Now, their father’s parenting skills were a lot different than mine. He believed in training his boys to be strong men, which often meant being a lot harder on them to get them to understand certain things. But, on the other hand, he treated his girls like princesses. He believed that if he did this, they would not allow just any man to come in their lives and treat them any less than what they deserve. I believe in treating all of my children the same. I know that it’s not a 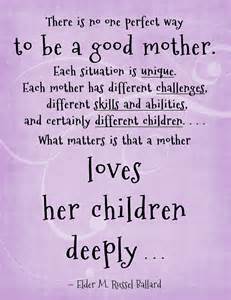 lways possible, but I try my best to never allow myself to show favoritism towards my children. I grew up, and even still today, seeing almost every day the boys being treated like princes and the girls being placed behind, almost nonexistent. I promised myself, to eliminate me treating one better than the other, I would do the same for all. Now, don’t think that I am bashing their father’s parenting skills, but with now having to raise them alone, I’m looking for the best ways to teach them certain things. I believe, solely, in the statement, “it takes a village”, but everybody’s way may not be the right way or the way that works for your child. There are some children who require other reinforcements or care, so to speak.

This process is a learning process for me. I’ve learned so much in the past few months about myself and my children to last me a lifetime, but I know that there is still room to grow and learn. My biggest prayer in life, involving my children, is for them to grow in God and never limit themselves. And I, also, want them to always remember that their father loved them so much more than they could ever know. This world is so unpredictable and your life can change in a matter of seconds. I am thankful to have a second (or thousandth) chance at life as a mother and as a person. As I stated before, and I will always say, I’m following God with my children in tow.