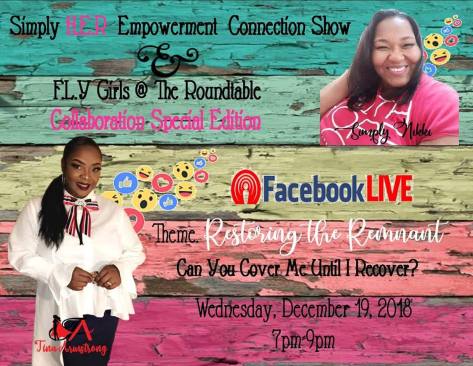 What do you get when 15 kingdom-minded women come together? An Unexplainable Encounter, that’s what. I had the honor and privilege of being invited to be a part of this awesome panel of strong women, who have been through different and even similar things in life. Some went through on the forefront and some, even, suffered in silence, but I can just about fully believe, through the testimonies of each woman present, all of us found strength in our pain to strengthen and build others. This meeting was not only for the women who were gathered around this conference table, but for many other people, who watched online or through social media, who needed to visually see 15 women come together in “Collaboration, and Not Competition.”

The SUPERWOMAN, herself, Mrs. Tina Armstrong, founder of Purpose Ministries, took over the Simply H.E.R. Empowerment Connection Show through Nikki A. Keyser, to talk about her upcoming event taking place on New Year’s Day at 10:00 AM at DJ’s Grill in Houston, TX. (Tickets are $45.00. You don’t want to miss it. See flyer attached.) The theme for the breakfast is “Restoring the Remnant; Can You Cover Me Until I Recover?” The scripture for the theme is Revelations 3:2 and it says “Wake Up! Strengthen what remain and is about to die, for I have found your deeds unfinished in the sight of my God.” Whew! Just typing it still makes me want to leap. Mrs. Armstrong had no problem giving honor to the Woman of God, Ms. Sherell Polk a.k.a. Pastor P., who started the conversation with an experience of her own where she ended up having to go through something on her way to church. Many of us around this table could definitely testify to going through on our way to serve, even at some point thinking of turning around because it was just too much to serve wounded. She talked about how she felt and how she basically hid in the back of the church, but someone saw her through God to embrace her and minister to her heart and spirit to restore what was shattered on her way to service. That’s what the theme is all about, covering another who is going through. You don’t even have to know exactly what a person is dealing with, just pray, cover them, uphold them where they are weak, encourage them. Sometimes, all we need is to just KNOW someone is there covering.

My fellow blogger, Ms. Victoria Dominique brought a perspective that truly opened my eyes to understanding being covered by one another and not always trying to fix ourselves. She described how many times, when we are sick, we self-medicate ourselves with over-the counter drugs and use home remedies to “heal” ourselves, instead of going to a doctor, who has been through schooling or has had experience in what you’re dealing with, and can, ultimately prescribe exactly what you need to get rid of the sickness. In life, we, also, try to self-medicate depression, loneliness, stress, and many other things with some type of replacement to try to suppress them without going to someone who has been through it already to uplift us or say, “I’ve been where you are”. The reason may be, like many women at the table stated, people may just want to be in your business or have their own ulterior motive, but you’ll know though your discernment who’s assigned to you and who is there only to attach themselves to you. Through her description of being in the hospital room and someone deciding to refuse treatment, I visualized a person being connected to an IV. The IV is placed in your vein to pump medicine, fluid, blood, or whatever is needed to make a person better or build what has been repaired. The refusing of care could be what many of the ladies referred to, as not wanting to say, “I need covering while I recover” or disconnecting the “IV” because of who God sent wasn’t who you expected, but what if the person who’s checking on you or asking you how you are feeling, God has already spoken to them concerning you, God has already placed you on their mind and all you have to do was open your mouth and accept treatment.

The last demonstration given, being we had some track stars at the table, was about the 4×4 race or the relay race. Ms. Special Scales explained to us non-track stars what it meant to “get light”. And she described how before you get ready to take off to run the race you have to remove any and everything that would slow you down. Through this race, I envisioned a relay race that never stopped. Yes, there is a finish line in this “track of life” and it’s so much bigger than just your regular track. In the race, at some point, you’re going to need SOMEBODY, whether it’s the sister or brother you’re passing the baton to so you can catch your wind, or the motivators on the sideline encouraging you to keep running, and you can’t forget about your Coach (God), who has given you all the tools during practice (Tests) you need to keep running and through it all, after you catch your wind, be ready to catch the baton to keep running the race. I believe this panel was part of that race. Some of us knew each other and some of us were meeting for the first time, but we all came together with a mindset to show the world WE CAN COVER WHILE THE OTHER RECOVERS. I want to invite you again to come for breakfast and expectancy of a move of God to start your 2019 off with a BANG! You don’t want to miss it. Be Blessed.